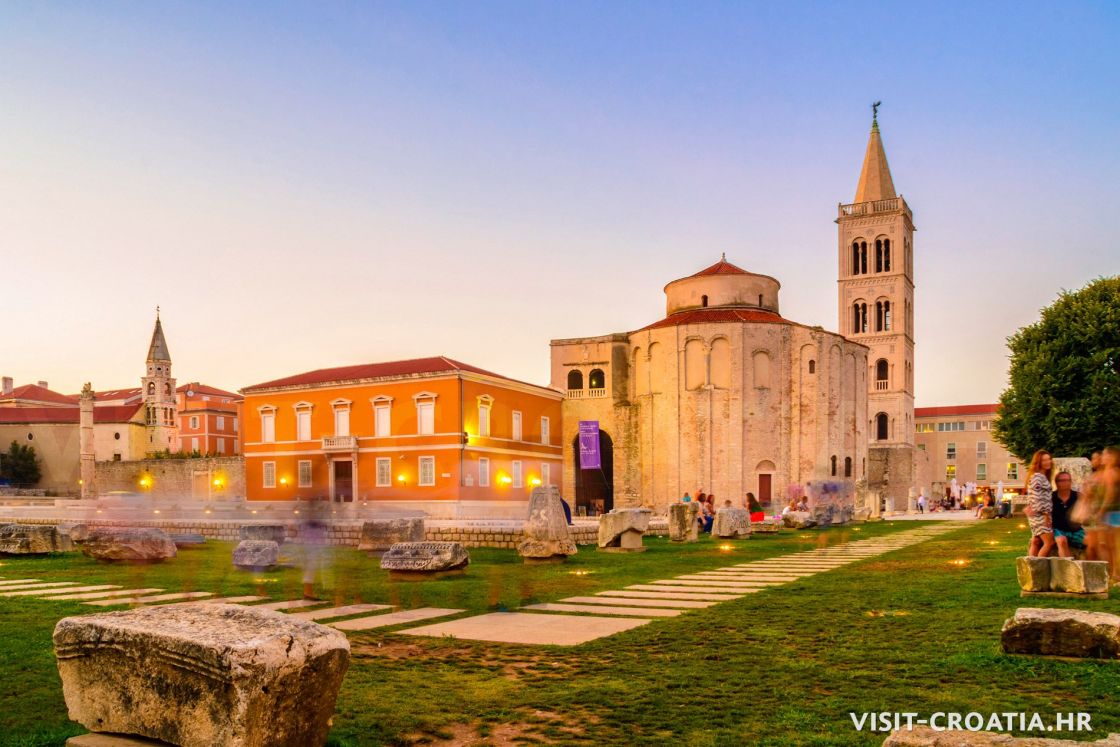 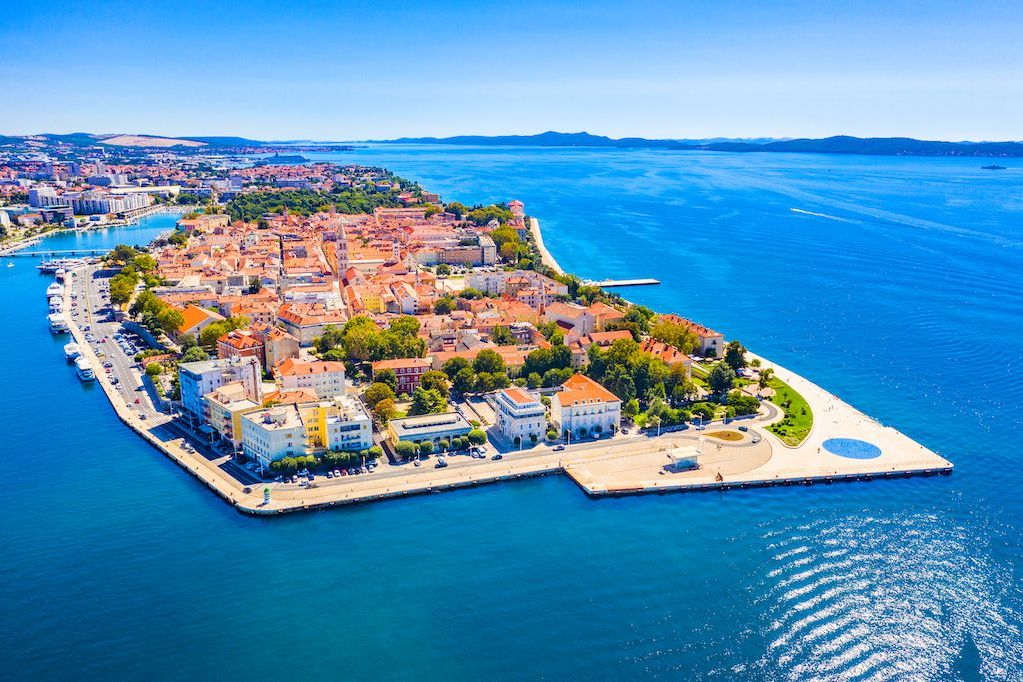 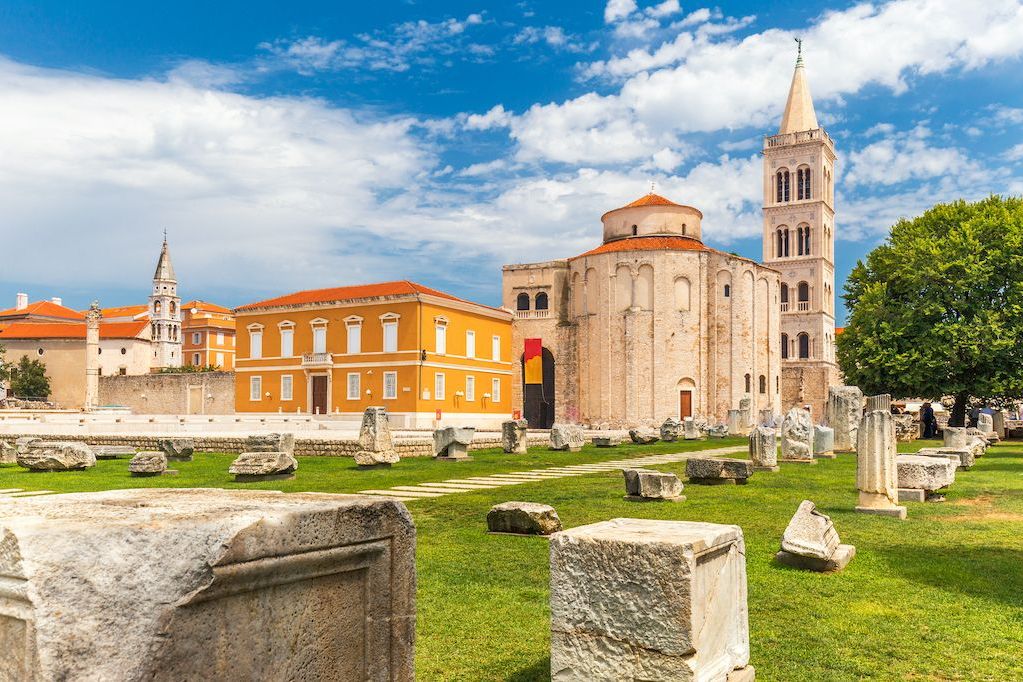 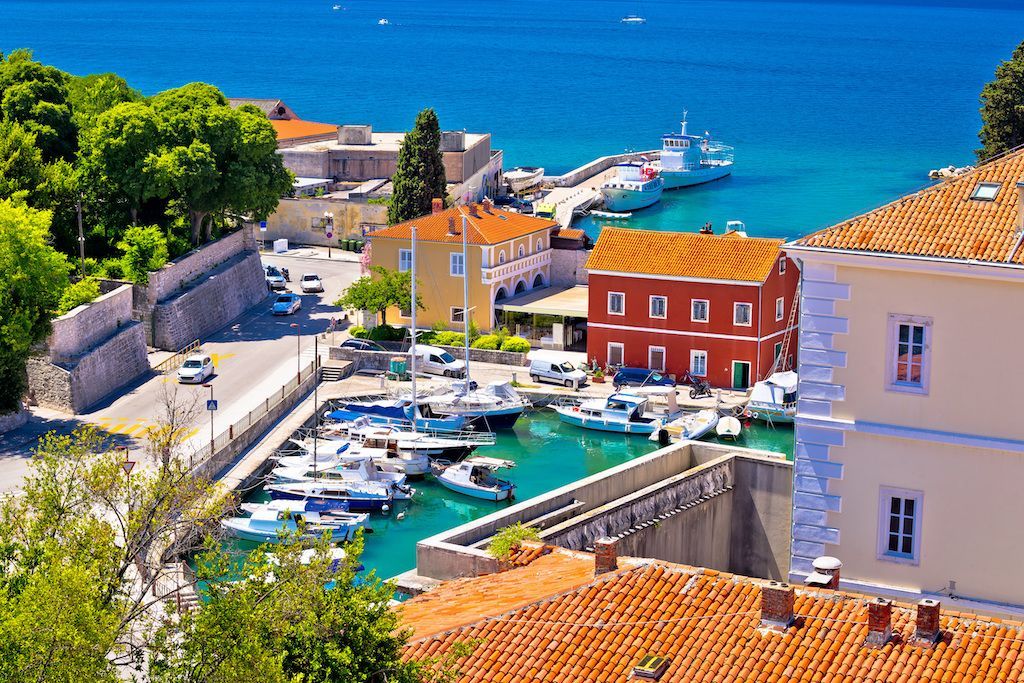 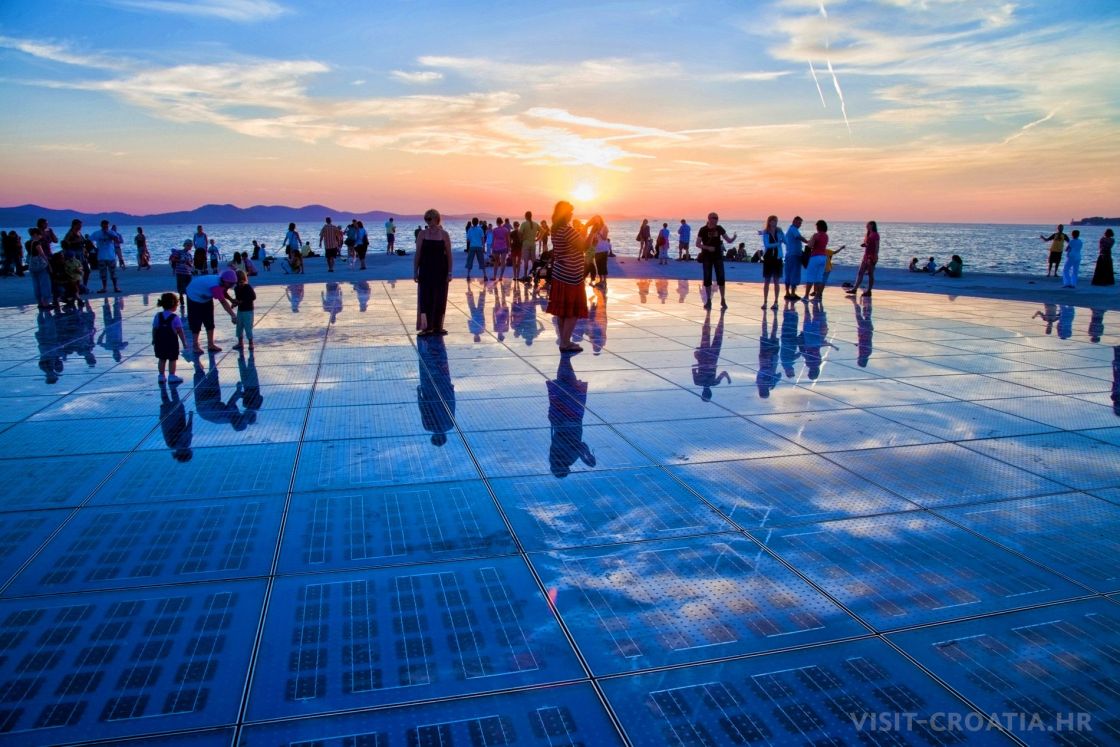 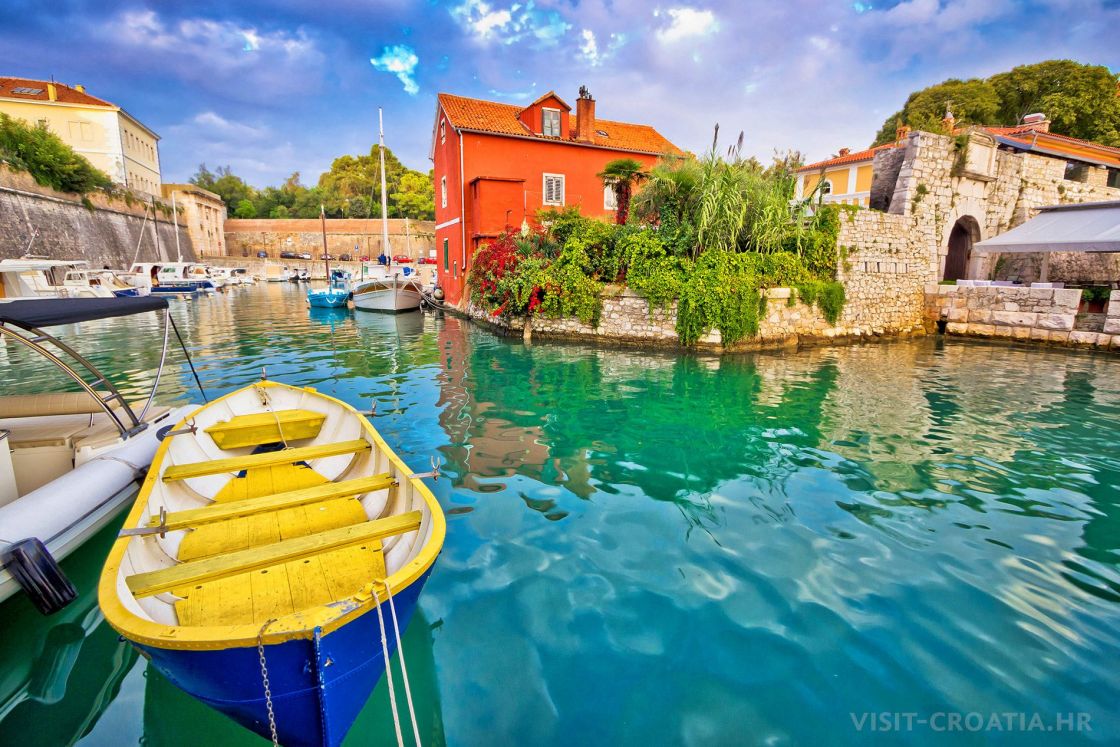 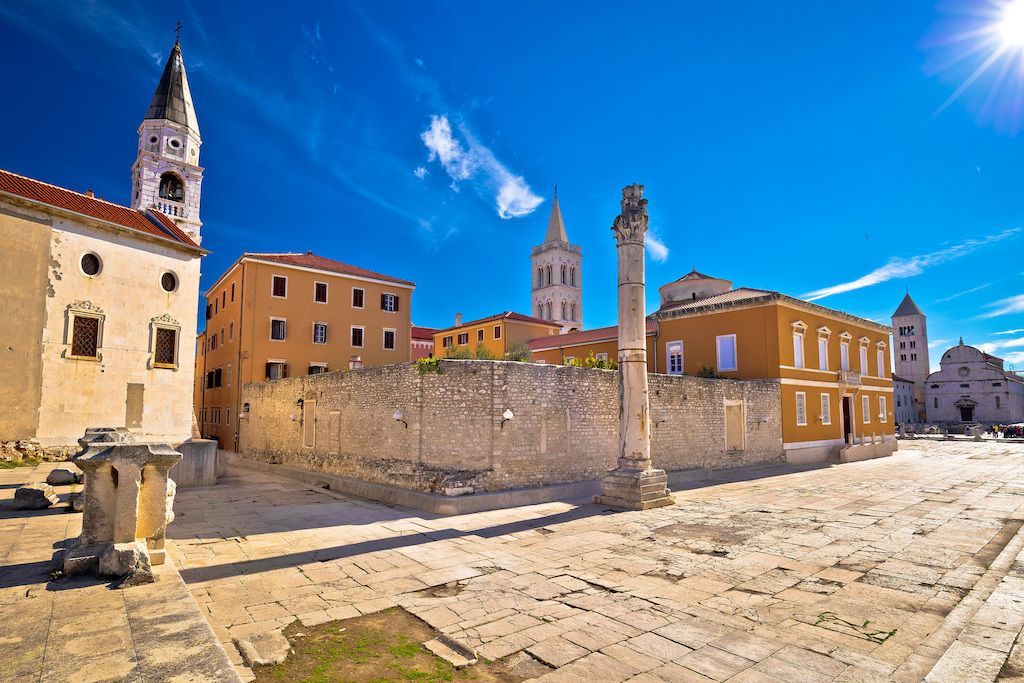 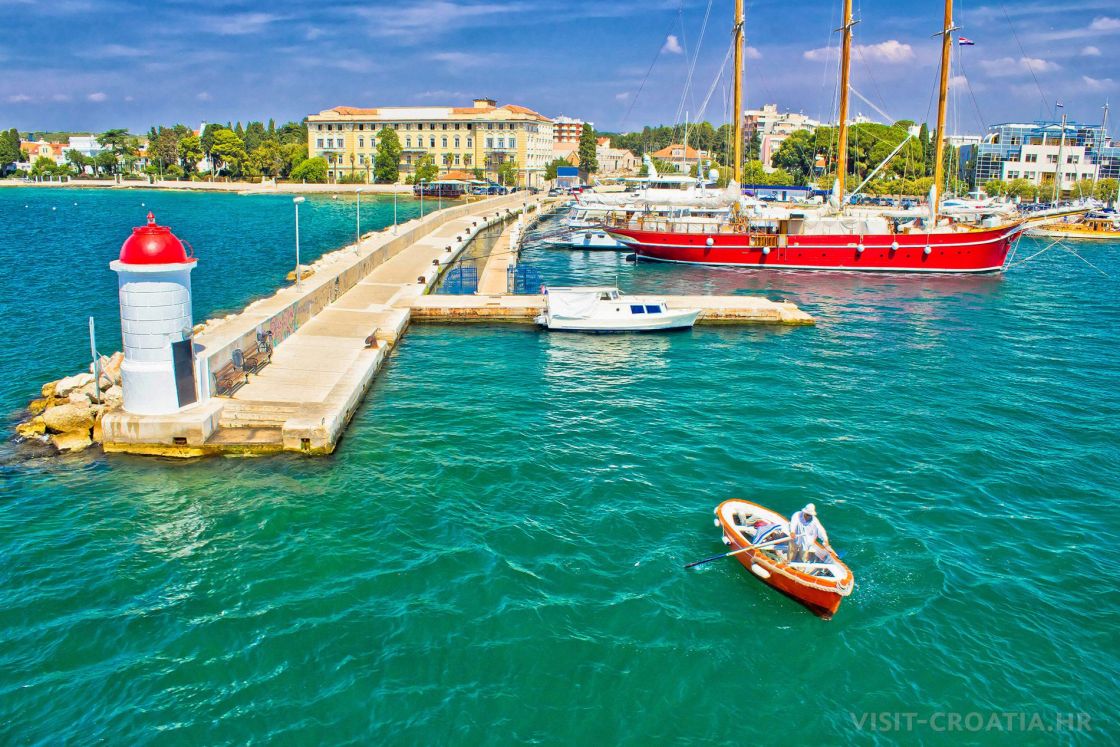 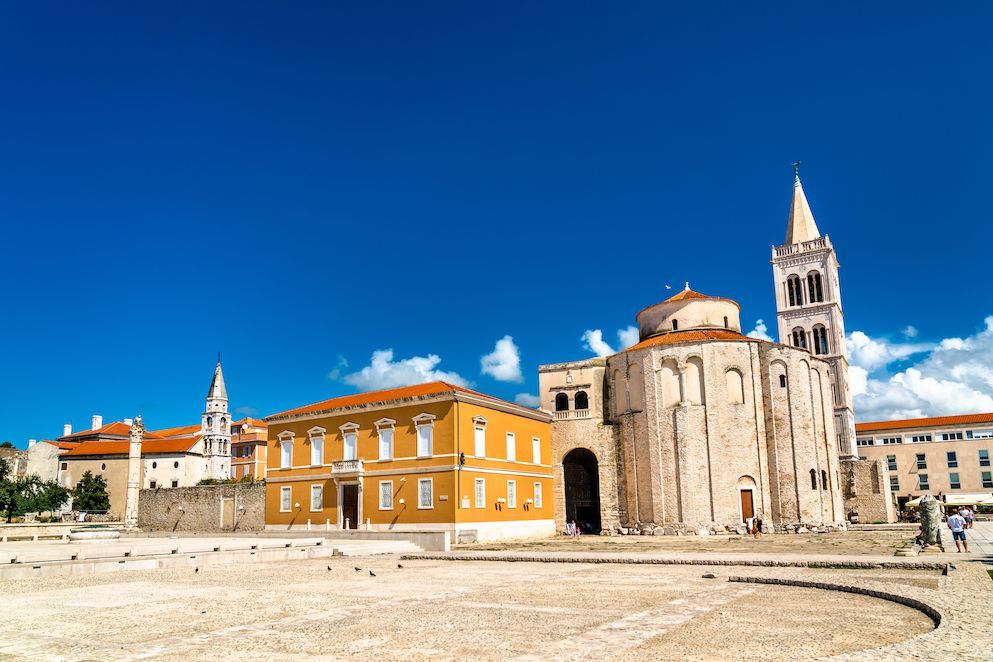 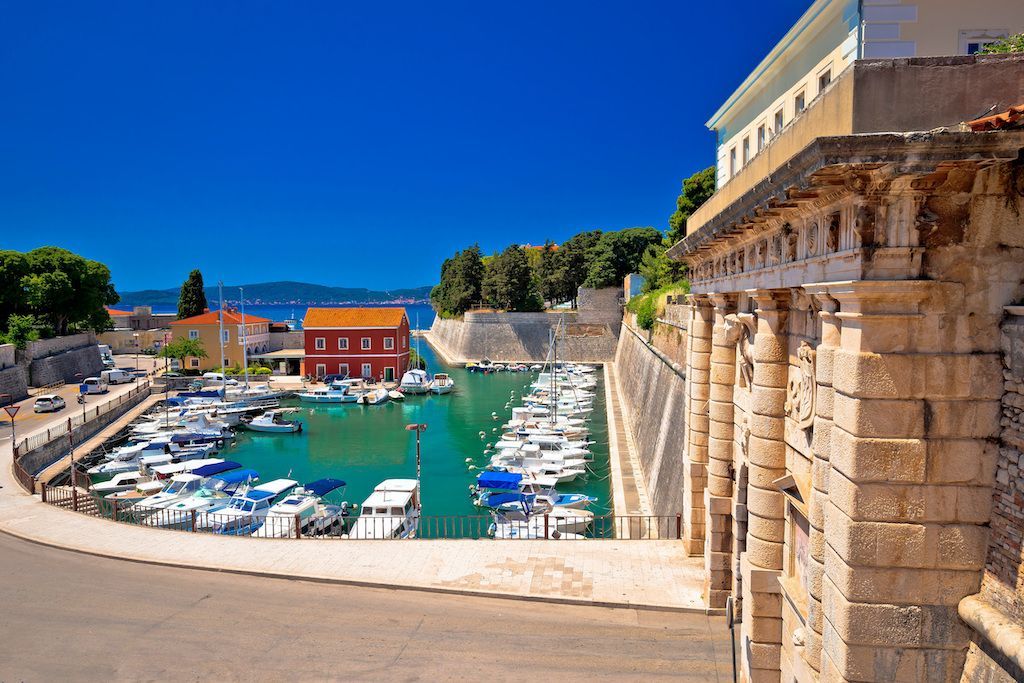 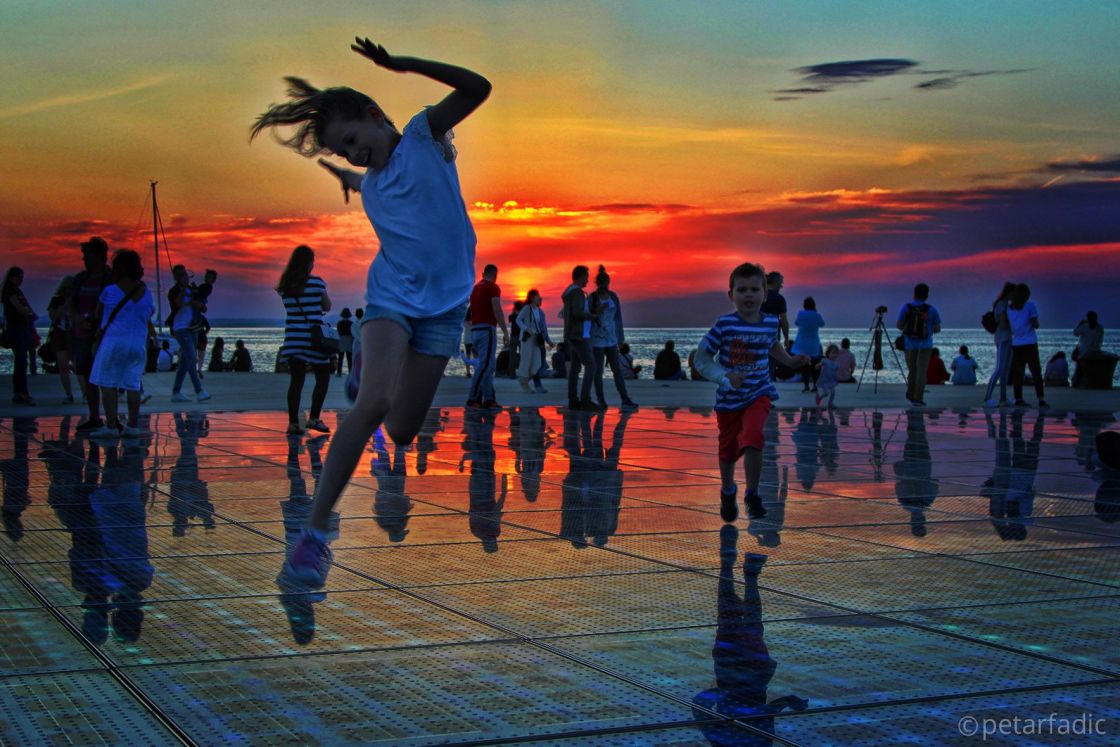 The city of Zadar, the largest center of Northern Dalmatia, is certainly another famous pearl of the Croatian coast and a must-see destination. Its old town that abounds with historical and cultural heritage, the highly indented coastline with an archipelago of more than three hundred islands, islets and rocks, the proximity of the most beautiful national parks (Paklenica, Krka, Kornati) and nature parks (Velebit, Telascica) make the city of Zadar an ideal base for many excursions and perfect for enjoying the beauties of Croatia.
Zadar’s center is located on a peninsula and captivates its visitors with stone buildings that reflect its rich history.
Zadar’s most famous sights include of course the Romanesque Church of St. Donatus from the 9th century, the Roman Forum from the 1st century and the imposing Cathedral of St. Anastasia from the 4th century. The Archaeological Museum of the city of Zadar will further evoke the entire history of the city. The main town square is the People's Square, where you will find the Rector’s Palace, the small Church of St. Lawrence from the 11th century, the City Guard with a tower that carries a beautiful 18th century clock and the City Loggia that today serves as an exhibition pavilion. Particularly interesting are the ramparts around the city on the peninsula, whose strong walls enclosed it in the 16th century for protection against Ottoman attacks.

Those interested in ancient culture will be delighted by a visit to the Museum of Ancient Glass, which houses an extremely interesting exhibition of decorative glass objects and glass objects of everyday use. Zadar's seafront promenade called Riva is one of the longest in Dalmatia and lovely for long walks. At the end of the Riva you can enjoy the sound of unique music that is produced by the Sea Organ, whose tubes are lapped by the waves, thereby creating their distinctive compositions in a playful rhythm. To experience a magnificent sunset head to the installation named Greeting to the Sun. This is another attraction of Zadar that represents an unusual monument consisting of 300 multi-layered solar panels, which absorb solar energy during the day and after sunset create a spectacular light show by the sea.
Zadar is also widely known for its rich nightlife. Its famous night clubs Arsenal and Garden, which organize various events and festivals throughout the year, are located right on the ramparts. During the summer, numerous music and stage events are held regularly in various locations all across the city center, while the Church of St. Donatus and the Forum become venues for concerts and music performances in the evenings.

Do not miss the " Nights of the Full Moon " in Zadar as it is an all-night party which is held every summer in July during which visitors can enjoy traditional Dalmatian cuisine and a capella singing until dawn. Do not miss to try the local fish and meat specialties in one of the many taverns of Zadar, as well as the famous local liqueur Maraskino. This unique drink, made from a special variety of cherry, has been produced here since 1821 and has been very popular among the nobility throughout Europe at that time. Look for accommodation in numerous hotels, villas and apartments, where you will enjoy the hospitality of the locals.

The archipelago of Zadar is an area with the highest density of islands in the Adriatic, counting more than three hundred islands, islets and rocks and confirming Croatia’s known motto of being a “country of a thousand islands". Geographically, Zadar is the central point of the Croatian part of the Adriatic, making Istria, Split or Dubrovnik, as well as the Plitvice Lakes and Zagreb easy to reach from there. Within the region of Zadar or in its immediate vicinity, there are some of the most beautiful national parks, for example NP Krka, NP Plitvice, NP Paklenica, NP Kornati, NP Risnjak, but also nature parks Telašćica and Biokovo. Zadar and the places in its surrounding are therefore perfect starting points for excursions to the natural beauties of Croatia. If you also take into account the fact that the city of Zadar is called the "city of museums", do you need more reasons to visit?

St. Donatus
The Church of St. Donatus, one of the distinctive symbols of Zadar, certainly represents the city’s most valuable architectural monument from the Early Middle Ages. Its architectural shape and layout bear resemblance to the court churches from the early Byzantine and Carolingian periods, and due to its monumentality and double interior space, it absolutely leaves a striking impression on visitors. According to tradition, it was built by the Bishop of Zadar Donatus in the 9th century, and Byzantine emperor Constantine Porphyrogenitus mentioned it in the 10th century in his famous work "On the Governance of the Empire." Originally dedicated to the Holy Trinity, it was only in the 15th century that the church was called by today’s name Saint Donatus. The monolithic columns as well as most of the architectural decorations in the church are of ancient origin. They originate mainly from the ruins of the Roman Forum, on whose foundations the church was built. So, while visiting Zadar and the Church of St. Donatus, take a closer look at the scattered tambours of Roman columns there. The church has not been used for sacral purposes for a long time, it even housed Zadar’s Archaeological Museum until the mid-20th century. Due to the excellent acoustics within the church, it has been a venue for various musical events for decades now. A particularly famous one is the international festival of medieval and renaissance music called "Musical Evenings at St. Donatus", that- among the many others- fills Zadar’s summer nights with a special festive and unforgettable atmosphere.

Roman Forum
The Roman Forum dates back to the 1st century, when it was established as the center of public life in Zadar. Until today, it has retained this important role. The former Forum consisted of a spacious sidewalk surrounded by regular-shaped stalls, in which craftsmen and traders had their shops. The basilica was located on the Forum’s southern and the temple on its western side. The remains of these buildings are still visible, as are the well-preserved fragments of stone slabs, sarcophagi and pillars. The remains of the Roman Forum with the imposing Church of St. Donatus in the background are perfect images worth capturing on camera while sightseeing through Zadar.

Sea Organ
Probably the most unusual instrument in the world is located on Zadar’s waterfront, where you will be able to enjoy the unique music of the Sea Organ that is created by playful sea waves. A series of stone steps leading to the sea hides an original system of sound chambers designed by the famous local architect Nikola Bašić. This incomparable and unrepeatable melody only the sea can compose and its dreamy tunes relax amazed visitors and create a completely different world…

Greeting to the Sun
The urban installation “Greeting to the Sun” is a model of the solar system and its planets, and one of the most popular attractions of Zadar. The monument consists of multi-layered glass plates with photovoltaic solar modules, which absorb solar energy during the day. In the evening this energy is transformed into a unique dance of light effects that, along with the rhythm of sea waves and the sounds of the nearby Sea Organ, create a fascinating visual and audio atmosphere.

Museum of Ancient Glass in Zadar
The rich history of the city of Zadar is testified by numerous archaeological sites in the Zadar region ( Zadar / Iader /Nin / Aenona / Starigrad-Paklenica / Argyruntum / Podgrađe near Benkovac / Asseria ). Unique objects from the time of antiquity have found their place in the interesting Museum of Ancient Glass in Zadar. The museum is located on top of the city walls in the restored Cosmacendi Palace from 1877 and in the modern architectural extension. Its permanent exhibition contains over 2,000 antique glass specimens dating from the early 1st to the beginning of the 5th century AD, and two storages with over 3,000 glass objects. In addition to the exhibits, a conservation and restoration workshop, a glass blowing workshop that produces souvenirs, a specialized library, a souvenir shop with a wide range of souvenirs and a cloakroom, the Museum also has two multipurpose halls where various exhibitions, lectures and concerts are held. This interesting and educational walk through the past is truly a special experience!

Archaeological Museum in Zadar
The best and most comprehensive way to learn about the rich history of the city of Zadar is by visiting and seeing the numerous exhibits displayed in the Archaeological Museum in Zadar. The museum, which was founded in 1832, is the second oldest museum in Croatia and one of the oldest museums in this part of Europe. It is located in a newly built building in the heart of the historic center of Zadar, the former Roman Iadera, near the Roman Forum and capitol, and the city’s main street Kalelarga. In the immediate vicinity of the museum is the Romanesque Cathedral of St. Anastasia and the Benedictine Convent and Church of Saint Mary which houses the permanent exhibition of religious art called the "Gold and Silver of Zadar". The Archaeological Museum exhibits many objects from ancient times, but also prehistoric archaeological material from the Palaeolithic, Neolithic and Metal Age. Particularly interesting is the exhibition of imperial statues (Tiberius, Augustus and the Unknown Emperor). If you want to peek into the rich historical heritage of Zadar, then the Archaeological Museum is the right place to see.

Cathedral of St. Anastasia
The patron saint of the city of Zadar is St. Anastasia whose sarcophagus with her relics is kept in the Cathedral of St. Anastasia in Zadar. This Romanesque structure is the largest church in Dalmatia, whose construction started in the 4th and 5th centuries and was completed in the 12th and 13th centuries. The facade of the cathedral is adorned with late Romanesque portals with reliefs in Gothic style. Its bell tower was built in the neo-Romanesque style and was completed in the 19th century. The monumental interior of the cathedral houses numerous sacral objects and valuable paintings. Saint Anastasia was a Roman woman who gave her wealth to the poor and devoted her life to caring for persecuted Christians. In the end, she herself died a martyr's death. During their visits to Zadar, Pope Alexander III in 1177 and Pope John Paul II in 2003, bowed and prayed to Zadar’s patron saint Anastasia. 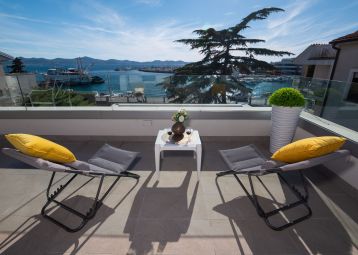 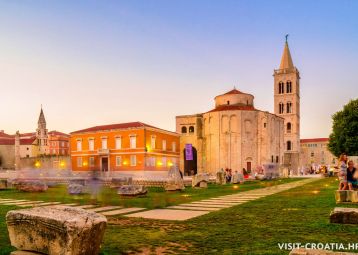 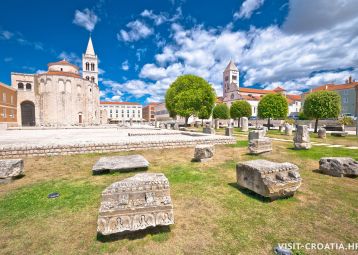